The Case of the Missing Halloween Candy

"No, officer, you must have me mistaken with someone else. I wouldn't eat all the Halloween candy before the kids get here to Trick or Treat. I'm not that cruel!"

"Ma'am, the evidence is overwhelmingly against you, but I'll hear your story before we put you away for good."

My heart was pounding. How was I going to get out of this. There had to be someone who could vouch for me. My head scrolled through the list of contacts in my phone, email, neighbors, friends, family - finally I came up with someone.

"Mdm Samm and Wendy. They've been organizing this blog hop that I've been furiously sewing for. You see, I wouldn't have time to eat all of the candy, I've been too busy." I showed him the burn on my hand from the iron, the welt on my finger from the needle and he seemed to be considering my innocence. "They have a whole list of people who've been involved. You can find it on Wendy's website at: http://why-knot-kwilt.blogspot.com."

"I'll look in to those people too, but why don't you give me a list of the ones I should be concerned with today."

I searched my head and came up with a list of talented quilters who could have pulled off a candy heist. I told him if he looked into the following people he wouldn't be disappointed.
Beaquilter
Fun Thread Designs
Stitch, Stitch, Stitch
Made By A Brunnette
Buttons And Butterflies
The Recipe Bunny
Quilted Delights
Sunshine Reflections
Louzeekreativ
Mice In The Mix
Rosemary - That Other Blog
The Fuzzy Hat Quilter
Sew We Quilt

That should have kept him busy all day, but he was back questioning me in an hour.

"Ma'am, all of those people have alibis and completed quilt projects as well. They've been too busy to steal Halloween candy."

My mind raced on to the last few people I could pin the crime on.

"OK officer. I was hoping it wouldn't come to this, but I have no choice. There's a couple strange people in town that have been asking questions all week on where to get more Halloween candy. But, they are a little spooky and live in that old house on Main Street."

We got into his squad car and sped over to Main. I'm sure the house was a lovely Victorian home when it was built, but now it was dilapidated and in bad need of repair. It gave me the creeps just looking at it and I desperately didn't want to go inside. 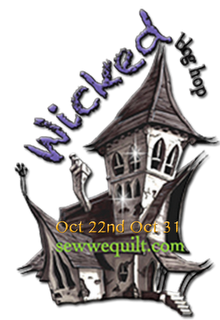 We knocked on the door and no one answered. I started down the front stairs, ready to jump into the squad car and lock myself inside. Instead, the cop knocked harder and the door did that creepy thing it does in the movies and opened up on its own with a haunted groan. Much to my dismay, we entered the house.

"The first one you'll want to question is Belinda," my voice said with a crack. "I've heard talk around town that she's the biggest witch around - a real piece of work. I'm sure she had something to do with the missing candy."

We heard a wicked cackle behind us and turned around just in time to see a puff of smoke. Belinda had vanished leaving behind only her hat as evidence of her existence. 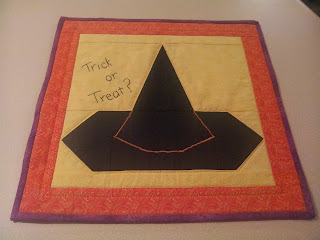 "She's got style, I'll give her that, but she knows we're on to her. I bet she'll never show her face here again," I said. The cop just gave me a look of disbelief.

"There's one other person you should talk to before we leave, officer."

Horace had to be around there somewhere. He liked to lurk in dark corners and wait for prey to fall into his trap. He was my last chance of getting out of this mess.

We walked up to the attic, the last place in the house to check. Upon opening the door we saw nothing but dusty windows and old cobwebs. Just as I was about to give up hope Horace swung down from the rafters and blocked our way. 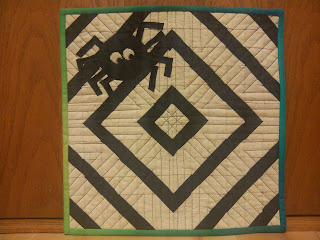 This was promising. Horace was a devious little spider. He was gifted at catching anything in a trap - his web of horrors - and he could get himself out of any sticky situation.

I patiently waited while the officer asked Horace for his alibi. Unfortunately for me it was rock solid and he had the web to prove it. He'd spent all week building it. This time his web looked hypnotic, almost like a time warp, and I was ready to jump right in and escape the house, the cop, the town - everything. 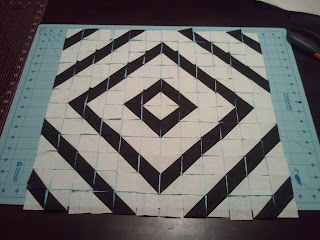 As I was about the jump, the officer placed me back in cuffs and herded me out to the street. The officer paused before putting me back into the car. "You spin a good tale," he said as he reached into his breast pocket for a photo, "but I'm placing you under arrest for candy theft."

I had one last option, but I doubted it would work. "Wait, can't I give you something to make you change your mind? Some fabric maybe? All you have to do is say something, anything, and make sure I can get in touch with you later to give you the fabric. I can get it to you by November 2nd, I promise!" 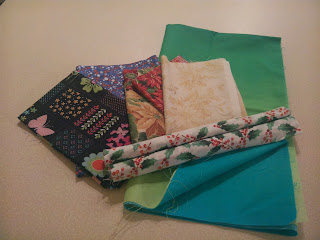 He shook his head and I knew my bribe hadn't worked. "There's just one thing I'd like to know," he said, and with a glint in his eye he flipped over the photo. "How'd it taste?" I hope you've enjoyed this little tale and the picture of me eating a giant slab of peanut brittle. :) If you didn't get it from the story, just leave me a comment below to be entered in the giveaway. Please leave me your email address if you're a no-reply blogger. The giveaway is open to everyone. I'll pick a winner on Friday, November 2nd. Now go cheer on the other bloggers of the day! Happy Halloween everyone!
Posted by Karen at 9:00 PM