I've been on quite a large knitting kick for the past couple of days. I've seen other bloggers mention the site "Ravelry" in their posts and hadn't spent much time there until last week. Wow was I missing out on some great projects!

I haven't been knitting for very long. This past March was when my mother-in-law showed me how to cast on and do the basic knit stitch. Since then I've been relying on youtube to show me how to do different stitches and to remind me how to tie a slip knot (I always forget, even though it's so simple!).

My mom gave me a bunch of cotton yarn to make into dish cloths, so I've been playing around with some basic patterns on some of those (Mom, if you're reading, act surprised when you get 10 zillion dish cloths for Christmas...). 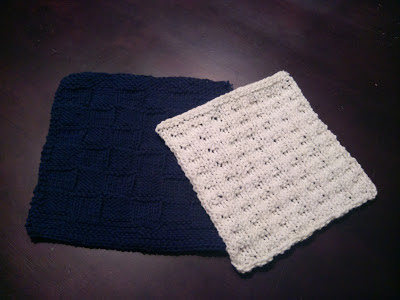 The blue one came out a little dark in the picture, but it looks like a basket weave pattern. The white was was called a waffle pattern. Both went really quick and were just a combination of knit and purl stitches. Simple - just the way I like it. :)

I've flagged a bunch of "easy" patterns on Ravelry to try out in these dish cloths so I can figure out which ones I want to make in to scarves for Christmas presents. So far I do really like these 2 patterns, but I have about 15 more I want to try before I make any decisions.

Going along with that, I do have one of my goals for October done - I've made my Christmas present list of things I want to make for other people. I have probably 10 knitting projects and at least 5 quilty things plus a few other craft projects thrown in here and there. So, I'm going to be very busy between now and the end of the year. (I'm hoping we celebrate with at least one part of the family after Christmas so that I have a couple extra days to finish things up!!!) I'll show the things I can as we get closer to Christmas, but some I'll have to show after they've been given away.

On another note... I made my first ever paper-piecing pattern today. It was a lot harder to do than I expected. I ripped out just about every seam at least once, some of them twice. But, I did succeed at making one out of 3 identical Halloween blocks for a little wall hanging. Hopefully the next 2 blocks go smoother and faster. Come back on October 31st to see what I made!