Remember when I said I was on a knitting binge? Well, I wasn't lying! Since then I have completed probably 2 more dish clothes, a full length scarf, and started a second scarf.

The first scarf I completed was for my husband. I thought about keeping it until Christmas to give to him, but it's in the 30's outside now, so he can put it to good use before December. 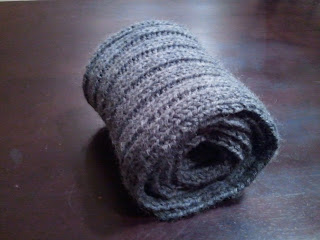 I used a wool yarn for the first time ever. I always associated wool with scratchy, but not this type. I bought it at JoAnn Fabrics - Lion Brand Superwash Merino Cashmere. It's marketed as the feel of cashmere and the warmth of wool. They weren't lying! My husband really likes it and it can be right up against his neck with no scratching. 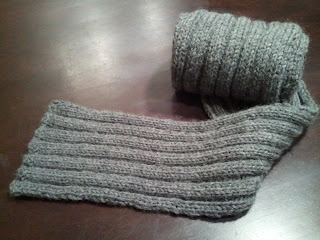 I had to do some blocking on this scarf, which I've never done before. Actually, I didn't even know what it was and I kept seeing it mentioned on Ravelry, so I had to look it up. I don't have a picture of the blocking, but this scarf was stretched out over my guest bed for a day and a half while it dried out with a million pins sticking out of it. I was pretty obsessed with getting the sides to not have any scallops. My husband even told me that the scarf looked good while it was still being blocked, so I can tell he really likes this project. I didn't even have to ask him what he thought about it. :)

If you'd like to make this same scarf, the pattern is a free Ravelry download available here. There's even a pattern for a matching hat if you're brave enough to try. I'm not quite ready for knitting in the round.

So, here's the second scarf I've been working on. It's another free Ravelry download (available here) if you'd like to try. It's the first time I've ever tried cables and I'm finally getting the hang of it. I had to take the whole scarf out after about 4 repeats because I didn't count diligently enough. I've also dropped a stitch twice somehow (still not sure how or when it happened), but I managed to weave them back up the few rows I had gone without it. There's one obvious mistake, but no gaping holes at least. 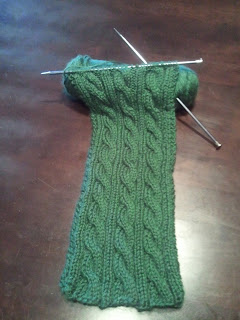 I'm using Caron Simply Soft in Sage Green for this one. I was hoping to give this one to my mother-in-law (she's the one who taught me how to knit initially), but we'll see how many mistakes I make before I make any commitments. It might end up being a little wonky scarf for me. So far it's not curling, so I may not have to block this one out. I think it's the difference in weight of the yarn between the Caron and the Lion Brand Wool.

So, of course these projects have side-tracked me from obligations I already had to get done. Maybe today I'll spend some time with my sewing machine to finish up the last Wicked Blog Hop Blocks. My day to post is Wednesday this week (Halloween!) so come on back then. I have one project done and hope to have one more for you. :) Happy crafting!
Posted by Karen at 8:08 AM