Hello everyone! I'm happy that I have another post for you so soon! Since I haven't had much time for sewing or crafting over the past month and a half I think I'm compensating for it now that I have time during the day.

I've been spending my mornings sewing while it's kind of cloudy and cool here. When I was unpacking my craft and quilt supplies I found the left over bits from my Over the Rainbow quilt. Basically they were a lot of strips ready to be sewn into 9-patch blocks. 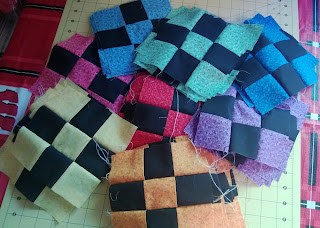 So, I sewed up all of those strips into these units - 54 of them. A lot of these seams were pretty off. I had sewn all of the 9-patch rows together when I was 13 and not very experienced. So, I'm not really worrying about things coming out wonky on this quilt. Actually I'm kind of liking the effect.

To make things even more wonky, I decided I wasn't going to just use these as straight up 9-patch blocks. So, I cut them all into quarters diagonally. 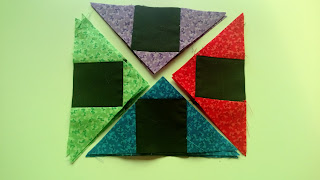 And then I grouped them so all the quarters were matched up with other colors and sewed them up into blocks. 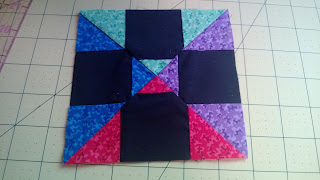 As you can see all of the points are kind of wonky. That's because the original seams were off, but I wasn't about to spend the time to pick out all of the seams I sewed together 14 years ago just so my corners would turn out. I'm thinking I'll be using this for a little beach blanket anyway, so it really won't matter. I'm actually liking the wonky bits of this. :) 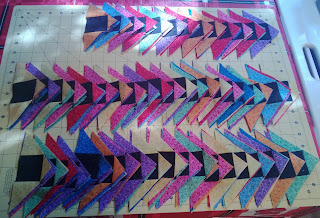 Here are all 54 blocks quartered, grouped and ready for sewing. I've got 14 of them done so far, so 40 more to go. Originally I squared up all of the 9-patch blocks up to 6 inch blocks. After sewing the quarters together to make the final block, they'll measure 5 1/4 inches square. So, finished they'll be 4 3/4 inches square. I'll have to add some borders to make it big enough for a beach blanket, but I think I'll finally use up all of these bits and pieces from my Over the Rainbow quilt. I really do love recycling! :) 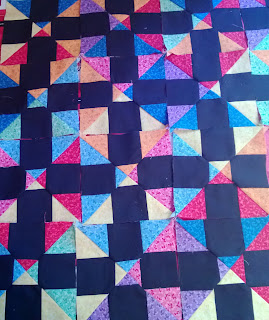 Happy crafting everyone!
Posted by Karen at 1:33 PM