I can't believe the first bit of sewing I did this month was on the 18th! The month is over half done, so that's just crazy!

For February, our host for the Color Bee Shocked Bee asked for a Japanese X block done all in blues. She sent a lot of great fabrics and I had so much fun putting the block together that I pulled out some of my blues and made her a second block. She is making the quilt for someone else, which I think is awesome. I'm sure they'll love it. 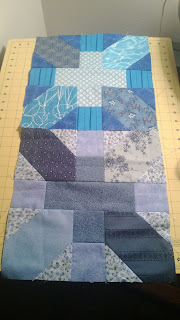 This past weekend I was very busy with wedding and bridal shower things. My good friends Heidi and Sarah were in town. Heidi's wedding is coming up in May and she lives in Florida, so this was the last time she would be in Wisconsin before the big day. I think she had an appointment every hour on Saturday, but she got a ton done.

Sarah and I spent our day between appointments and getting the goods for a bridal shower we hosted for Heidi on Sunday. Unfortunately, I was so busy getting everything ready and leading games that I didn't take any good pictures. 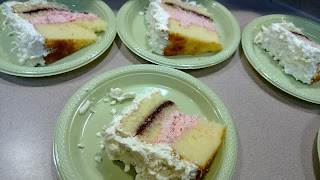 But, we put together a mimosa bar along with half a dozen other beverages. We also had a bunch of little appetizers including little fruit parfaits, veggie pizza, hot crescent roll sandwiches and some other finger foods. It was a lot of fun and I think everyone had a good time.

We played a couple games. I think the one that people got the most into was the "What's in your purse?" game. It's a game where you get points (either added for good things or subtracted for bad things) that end up in your purse. The mother of the bride won the game and her purse was very heavy, but filled with lots of good things! I also gave a prize to the person with the least amount of points for having the cleanest purse. Sometimes I think that's the hardest thing for me to keep clean!

We also played a trivia game for the Bride. I asked her fiance a bunch of questions in advance and she had to answer them all the same way he did - sort of like the newlywed game. If she got the question right I gave her a dollar. If she got the question wrong then she had to eat a piece of gum. We had some really bad flavor combinations and she had quite a mouthful by the time the game was done. :) 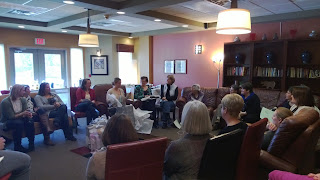 The activity I liked the most was creating a date night jar for the bride and groom. I saw the idea on Pinterest. I had 3 colors of popsicle sticks for date ideas. White was a stay-at-home date. Red was a cheap or quick go-out date. Silver was a more involved or more expensive go-out date. We had a lot of good entries. My favorite was an at-home date submitted by the bride's Grandma: Clean the garage and then shower together. :) When they were all filled out, the sticks went into a jar for them to pick from when they want to do something but don't know what to do. Some of the sticks were still blank, so those will be choose-your-own-adventure dates or sticks where they can write some of their favorite activities.

So, now that the shower is done and most other wedding plans are all figured out, I might be able to do some more sewing. I've still got my Over the Rainbow quilt to finish and plenty of other things waiting in the wings. Happy crafting everyone!
Posted by Karen at 10:30 PM